“Don’t feel limited by where you have started from, just start.“  These are just some words of inspiration by Rhonda Joy McLean, who has worked hard to defy the odds.  Rhonda has evolved from being one of the first people to integrate her high school in North Carolina at thirteen to becoming the first African American female attorney hired at Time, Inc.  Her unique journey has been filled with many successes and hardships, but through it all, she has maintained her strong sense of pride and individuality.  She has used her duality as a woman of color to build her strength and has integrated the lessons she’s learned along the way into her book, “The Little Black Book of Success: Laws of Leadership for Black Women.”

When I was advised to read this book by my long time friend, I had no idea that just a few weeks later I would have the opportunity to spend nearly two hours with one of its authors.  I could have sat for hours, listening to Rhonda tell her stories and gaining invaluable knowledge about her rise to success.  Rhonda has a warm spirit that makes you feel at ease instantly; not to mention, her wit is unmatched.  At five feet tall, she has expressed that she “always felt very tall inside” and was encouraged early on to use her voice to uplift others.

Writing the book along with her two best friends, Elaine Meryl Brown and Marsha Haygood, turned out to be a remarkable collaboration.  Their shared experiences as African American women in corporate America has bonded and enabled them to help one another over the years.  They would regularly have dinners together that became known as “Girls’ Night Out,” where they would create a safe space to talk about their professional and personal lives.  They would pitch their ideas, rehearse how to approach their bosses, and discuss their feelings about numerous circumstances that arose in the work place.  In fact, it was during one of these routine gatherings that Elaine approached her peers with a proposal to write a book of leadership advice.  The book was to be a collection of the mistakes they’ve made, the principles they’ve lived by, and the challenges they’ve overcome to become the strong leaders they are today.  The result: “The Little Black Book of Success: Laws of Leadership for Black Women.” 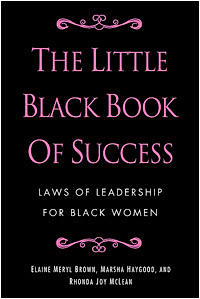 One of the unique features of the book is its incorporation of “MAMAisms” at the end of each chapter.  These are lessons that have often been instilled in us by our mothers, grandmothers and other family members, but are presented in the context of leadership development.  Simply put, “mamaisms are those familiar terms, both practical and spiritual, that we grew up with and can draw upon as we travel through the road to leadership success.”  The mamaism that resonated most with me was, “Do not let other people kill your joy,” a saying that my mother would often preach to me while growing up.  I appreciated seeing that the morals and values I was taught could be used to strengthen my ability in the workforce.

Although the title of the book specifically refers to black women, Rhonda explained that “leadership is colorblind.”  The forty principles presented in the book can apply to anyone of any race, gender, age, and work setting.  However, the authors felt that it was crucial for the book to provide representation for women of color, due to their lack of presence in the discourse on this subject.  Of the more than 7,000 books on leadership (in 2007), the authors found that none of them mentioned women of color in the title or table of content.  Through this book, we now have a platform to showcase our unique experiences.

With thirty years of experience practicing law, ten years of experience in the nonprofit sector, and four degrees culminating in her J.D. from Yale Law School, Rhonda has amassed a wealth of wisdom to share with others.  She ascribes her success to having a solid network of support that believed in her and instrumental mentors who have helped guide her along the way.  She has since strived to do the same by serving as a mentor or sponsor to others.  She also works with the New York Women’s Foundation and the Greater New York Chapter of the Links, Inc., which both have domestic violence as one of their missions in terms of enhancing the lives of survivors.  She encourages people to be honest with themselves and not feel ashamed to seek aid, which is often readily available via the technology we have today.  It is also important to utilize community resources such as churches, community centers, your local YMCA, and Boys and Girls Club to gain access to support networks and activities.

While Rhonda’s rise to success has been filled with many highs, she has also seen some lows.  She experienced the loss of friendships, changes in her relationships, and was hospitalized for depression twice.  The overt hostility she encountered when integrating her high school admittedly took a toll on her.  She vividly recalled being spit on, insulted, shunned, and isolated by her fellow students.  She also proclaimed that she worked herself into exhaustion, trying her best to solidify her place in her profession.  She admitted that she was unaware of what depression looked like and recalled being listless, fatigued, and not engaging in her usual routines.  These incidents taught her a vital lesson in self-care.  She is a firm believer in working hard, but also recognizes the importance of taking a break to have fun, travel, spend time with loved ones and to enrich your spirit.

I left my interview with Rhonda Joy McLean, feeling rejuvenated and hopeful for my future.  Her fortitude, kindness, and passion for her work were infectious.  If you have ever doubted yourself and questioned your capabilities, I urge you to read her book.  Remember, “It’s not how many times you fall down, but how many times you get back up.”